Yancey Richardson Gallery is pleased to present Photobooth Pieces, Jared Bark’s debut exhibition with the gallery. Comprised of unique vintage photo booth assemblages made between 1969 and 1975, the exhibition demonstrates Bark’s innovative and experimental use of this prosaic and restricted photographic format to explore a wide range of artistic concerns from performance to seriality, minimalism and abstraction. Arranged side by side, the assembled strips of four exposures become a ground for geometric abstractions, public interventions, time-based performances and appropriation.

Bark’s earliest photo booth piece, created in 1969 in New York City’s Times Square, was conceived as a participatory piece in which Bark asked members of the public to enter the booth and have their photo taken and then take one of the pictures themselves. Although he acquired his own photo booth in 1972, Bark maintained his interest in the “marginal public/private space” of the booths he found in Times Square where in 1973, presaging the Pictures Generation, he re-photographed body builder, wrestler, beauty and porn magazines. On cross country road trips out West in 1972 and 1975, Bark made other works in the public photo booths in various towns, inserting himself each time into one of the strips among the strangers, emphasizing his “everyman” status and denying the cult of the artist as lone genius.

In 1973, Bark began using his personal photo booth to actively explore the limits of experimentation within the confinements of the booth’s cramped space and the inability to alter the lens, shutter speed or format. Treating it as a private theater and a tiny studio space, Bark used his body as a ground for painting or made abstractions by placing cardboard and sticks in front of the lens. Sometimes he merged the two, using his arms as an element with which to simulate sine waves or geometric forms. Given their sequential nature, some images take on a cinematic quality, occupying a unique position between photography and film, heightened by the interplay of movement and stasis.

The artist’s interest in questions of seriality, built-in constraints, and authorship echo contemporaneous artistic movements, including conceptualism and minimalism; he cites Sol LeWitt as having a significant impact on his artistic formation. However, Bark approaches these issues with a more playful attitude. Careful planning of the work with drawings and notes did not entirely mitigate mistakes and accidents, which the artist relished. 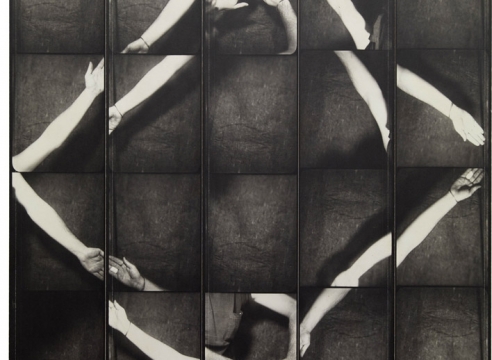 Jared Bark
Back To Top